I know the Z3M and Coupe come with a limited slip differential as standard but I've seen two references on the web saying that the 2.8 was also fitted with one? Is this true?

Location: On the edge!

I recall that the LSD was standard on the 2.8.

My '98 car definetely had one

Take it from personal experience (and worn rear tyres) that the 2.8 definitely had limited slip

Location: Behind you in West Essex

In God We Trust - everyone else gets PNC'd.
Top

The only way to be sure ref an LSD is to check the final drive serial number - usually on a metal tab under one of the rear cover bolts.

If you have an LSD, the number is prefixed with an 'S'.

I cannot see why any car with a traction control (ASC etc) needs an LSD, which is why the early M cars had an LSD - the ASC was not ready then. Although a LSD is more efficient, not applying the brakes or retarding the ignition, it is heavy and expensive. It also cannot respond as quickly as a decent electronic system.

My 2.8 does not have the serial tab - it probably fell off - but I really doubt if it has an LSD, judging from the feel of the wheels when jacked up on one side.

Most owners want to believe that their car has an LSD, as it is considered 'sporty' and so accept the sales blurb which tells them that even the 1.9 has an LSD, or that it was fitted to the late 'Sports' models. BMW's sales brouchures are pretty dire, even claiming that the Z3 anti-roll bars promote an anti-dive characteristic, which is impossible! Believ tham at your peril!

The parts list is no help either - it lists an LSD for every Z3, even the 118 bhp 1.8 model, but it is not conclusive evidence.

Another point - if you have an Emergency spare wheel, running with it fitted on the rear would fry the insides of an LSD - another reason to doubt that one is fitted. The M cars of course are supposed to keep running on the normal wheel, so would be kind to their LSD.
Top

Of course.. neither ASC nor DSC substitutes LSD on track..

Mike Fishwick wrote:The parts list is no help either - it lists an LSD for every Z3, even the 118 bhp 1.8 model, but it is not conclusive evidence.

What makes you think so? Why do you think the ETK would lie? It even lists different parts for different prices for the different models...

Maybe you should consider that ALL Z3 models first came without any electronic traction control. ASC was introduced later. If the original design was to have no ASC at all, then the slip differential makes perfect sense anyway, doesn't it? You should also consider that the design of the car goes back more than 10 years, and production started in 94. At that time, ASC was not standard at all (and CPU speed was a problem!). Even my E36 316 Compact from 1994 has a LSD (and no ASC) -- IMO it would simply be stupid to make a rear driven car without LSD.
Top

The Z3 is my first RWD car and I do now feel it has an LSD as it will light both tyres up if you dump the clutch in wet.

Apart from the M range, usually only the "Sports" 3-series (eg 328i Sport) came with LSDs fitted as standard, but it was probably an option on all of the others anyway?

I kind of think an LSD makes the back end more lively in terms of swinging round as with out one only one wheel will spin and the other will will still have lateral grip whereas with both spinning the back end will be more lively I would have though.
Top

The ETK shows a picture titled 'Limited Slip Differential' for every BMW ever made - including the humble 316 saloon, probably to save the space requireed by another graphic. the part number is the key, and will provide the appropriate (LSD or not) for the car in question.

The only way to really check is to run your car with one rear wheel on rollers (and the ASC turned off) as done by srutineers before the Exeter Trial etc. An LSD-equipped car will drive off the rollers, whereas a normal car will simply spin the wheel on the roller side.
Top

Other Z3 3,0 or 2,8 have a visco coupling diff TORSEN 25% (optionnal equipment for country or customer).

Hi Marc. Where do you take that information from?
I ask because all BMW sources I've seen so far are very unclear about the diff, be it the sales brochure, the car manual or the ETK.
OliZ - webmaster of http://www.bmwz3club.ch

I have the original factory spec sheet for my Z3 2.8 and it definitely has LSD - don't know whether "standard" or an "option" - that's just the way it came to me
Top

. However when it started to get noisy, I replaced the diff with a limited-slip one.
Non-limited-Slip Diffs are usually stronger (mine had done 120k when I replaced it, much hard use methinks), and therefore last longer. Lots of foot-down antics out of side-turnings will kill a LSD pretty quickly.
Top

Hi I am new to this so bere with me if I get things wrong. I have a 1997/8 Z3 2-8 Roadster and the Rear mounting on the diff has broken in two allowing the diff to hang down underneath. I cannot find a replacement part it is a 188mm medium size diff
Part number 33101428439 The part I need is Part no 33111428238 Can anybody help? I would consider buying a whole diff if necessarry. Before anybody queries it this is not the common fault where the Spot welds fail in the boot floor.
Top

Do you know how the diff mount got broken? Is the rest of the body structure fully intact in the area? It would seem very odd for the diff mount to break without other signs (i.e. spot weld failure) unless you've bottomed out on something and it's been given a whack maybe? When you say the mount do you mean the mounting arm on the diff cover itself? (your part numbers suggest this) or the mounting bracket which is attached to the car body?
Top

You can always check the specification for your car from by using the VIN number. The code for differential lock 25% is S209A.
You can definitely feel the difference if you have a differential lock. When giving full power in a turn, the inner wheel is not spinning, the car acts more like a gocart with a stiff shaft between the back wheels.
Top

The short answer is 'Yes,' as UK-market cars were fitted with an LSD. Get a printout of your cars's build spec and see if it states 'Sperredifferential 25%.' This blanket description is actually meaningless, as from September 1998 (at least) the diff was of the Torsen type (TORque SENsing) which does not use a pre-set slipping clutch etc, but worm gears giving a gentle and infinitely-variable torque sharing effect.

A torsen diff behaves in the same manner as a normal 'plain' diff when jacked up and the wheels are turned, which confuses a lot of people, and in operation it is very subtle.

I think the rationale of fitting a torsen diff with a traction control is the the torsen will react and share torque before the rear wheels lose traction, when the ASC will have a useful job to do.

Frankly, I do not know why some people get excited about having a clutch pack type of LSD, as in slippery conditions the normal diff will feed torque to the wheel which has lost its grip, making it spin, slowing the car down and also taking torque off the only rear wheel which still has some grip left, thereby perhaps saving the day. The torsen gives the best of all worlds, unless you are one of those poor people who think that doing doughnuts, or hanging the tail on corners, is somehow admirable, there is really no point.

I will probably be slagged off for such heretical thoughts, but I like cars to go where they are pointed and not argue with me!
A Z3 is not just for Christmas - it's for life!
Top

A 'hard' LSD will make it more likely that a heavy footed driver will lose the back end quite readily. An open diff will always spin up the unloaded (inside the curve) rather than spin up both rears as an LSD will. My experience in 2003 with an inexperienced driver who had never driven RWD before in my Westfield, was that the rear goes very precipitately. The Armco and the lamp post go to show it!

My 2.2i Z3 Sport registered in the final five days of production has a Torsen diff but I have never trusted it to the once-upon-a-time inexperienced driver. He's very happy for me to drive his Z4M Coupé however! He learned the lesson at my expense. 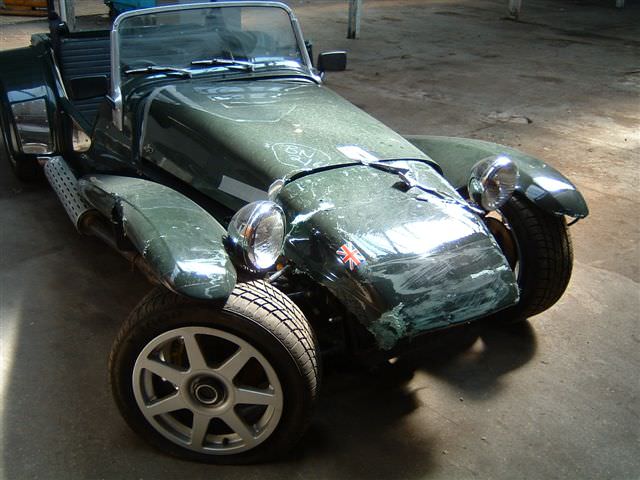