I got a Nextbase 422GW dashcam, which I have been running from the lighter socket for the past weeks. This works, and although I managed to tuck the cable away around the windscreen, I still had it trailing over the steering column and occupying the lighter socket. It is also preferable to have the camera on a switched supply, as whilst it is powered it is recording all the time. When unpowered it goes into parking mode and only records in response to a shock or jolt. I got fed up of having to plug and unplug it every time I drove the car, so this weekend I tacked the hardwire kit.

The kit included two piggyback fuse connectors that allow you to remove a fuse and put it into the back of the connector and take a second 2A feed off the back of it without having to butcher the car's wiring loom. The kit also contained a very long cable with a power adapter to drop from 12V to 5V in the middle of it - one end has a moulded USB mini-plug and the other a bullet (live) and a forked connector (ground).

I tackled the easy bit first and removed the A-pillar trim on the passenger (left) side of the car. The logic here is that the fusebox is on that side, so it should be easier to get a feed without having to run wires the width of the car.

The trim is held in place by two clips on the front edge, which just pull out when levered with an appropriately blunt instrument. The rear edge is held in place mainly by the rubber door seal, but also be a small tab at the top, hence the front edge needs to be released first. With the top of the trim free, the bottom just pulled out in a gentle arc motion. 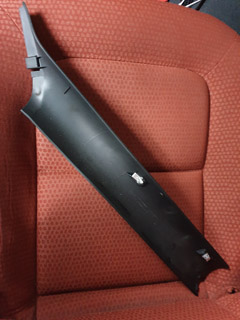 This revealed the A-pillar, and you can see the two receiving tabs that the clips push into. I routed the cable behind these, so it is safely out of the way. Whilst you could tuck the cable behind the trim without removing it, it was necessary to take it off to pass the up from under the dashboard. 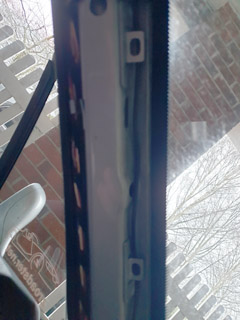 The next step was to get a power supply for the camera. Having looked in vain for any nice holes in the firewall, it appears that there aren't any. So I set about removing the glove box in order to have a look at the electrics that I know are behind there. This is done by removing the 4 trim screws (with the annoying plastic caps) from the glovebox panel - two of these are hidden by the glovebox door, one faces out through the door on the end, and the other is nearest the centre console. There are also two screws that join it to the the side of the centre console and two plastic locking clips (which need a quarter turn to release them) on the underside of the glovebox in the footwell. The lower trim piece removes first and it is clipped into the centre console on one end. The glovebox will then come out will a gentle downward pull to release it from the heater vent in the footwell. This revealed the following: 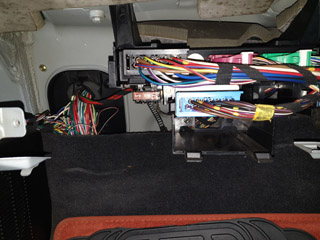 I could now take the dashcam cable through the gap revealed by removing the A-pillar trim. The moulded USB connector was a pain, and as it was smaller then the power adapter module, I had to pull this up through the gap using a wire that I had first threaded downwards. A lot of twiddling aided by an awful lot of cursing and it finally went through. For the top of the windscreen frame, it just tucks behind the trim, and comes out just by the rear view mirrow where the camera is mounted.

You can see the huge bundle of wires that is where the wiring loom goes through the bulkhead into the bottom of the fusebox. There does not look to be an easy way to sneak an extra wire into this, and the fusebox would have to come off to even see the from the engine bay side, I elected to give that route up as a lost cause. One thing to note on this picture is the almost mythical 40A fuse that we seem to have trouble finding.

I then looked at my stereo and rembered that part of the adapter for that is made with bullet connectors. So after a long search to find the metal keys to release it, I pulled it out and sure enough there is both a permanent and a switched live going to the back of it, and these have bullet connectors in them. Even better still they are the same size as the one on the hardwire kit. So with the hardwire kit connected to the switched live from the stereo and grounded using a suitably convient bolt, I tried it and it exhibited the desired behaviour of turning on with the ignition. Wonderful. I can now choose between stereo or camera, but not both.

Next step was to make up my own adapter to split out a supply for the camera whilst also having the stero connected. I couldn't find any bullet splitters (which do exist), so I made up a Y-piece with a male bullet on one end and two female bullets on the other. As the wiring for the camera is thinner than that for the stereo, I opted to include an inline 2A fuse, so in the end I made my Y-piece from a Halfords micro fuse holder, with one side bent and soldered into the male bullet.

I tidied up with a few cable ties, and rather than try to shorten the dashcan cables, I bundled them up neatly and put both the power adapter and excess cable into the spare module slot under the blue connector.

With that in place, another test and both stereo and dashcam function simultaneously. And then, as they say, assembly is the reverse of removal!

Users browsing this forum: No registered users and 3 guests