Haven't posted for a while so thought I'd share some updates on my Z3 with the 1.9 twin-cam M44 engine. I've had it six years this summer, and each November I put it on SORN where it goes into the garage, gets a service and I can make any repairs needed. It passed its MoT yesterday with no advisories (phew!) after a cooling system rebuild over winter. As expected with a car that's almost 22 years old, it wasn't as straightforward as I'd hoped...

At 96,000 miles, I thought a cooling system overhaul was needed, so I ordered a new Mehle water pump, Behr thermostat and auxiliary drivebelt (mine doesn't have air-con). With the car tucked away and up on axle stands, I started stripping down the front end: front bumper and undertray first, then the cooling fan cover, shroud and for more room, I removed the airbox too.

I knew my MAF sensor was dead and would need replacing. Last year, the idle speed was a steady 1,000 rpm in all conditions. An INPA diagnostic check revealed it was at fault, so I disconnected the MAF and it idled more normally. I chanced a good used replacement from an eBay breaker and fingers crossed, it did the trick.

The coolant can be drained from the bottom of the radiator, the cylinder head and the two hoses. I was going to flush the radiator anyway. It's held in with some plastic clips on the slam panel and comes out easily. With all this removed, there is a nice amount of space in the engine bay to work in: 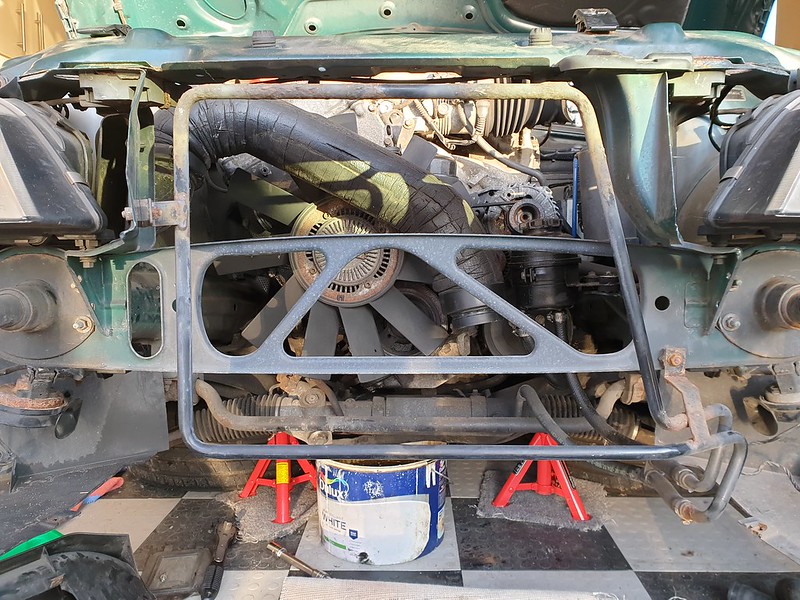 The above photo was taken during an oil change, with the flexible air intake hose that runs across the radiator still connected. This seems an odd bit of design; the hose is insulated and runs over the top of the radiator to meet the intake next to the OSF headlight. Anyway, once done, the drivebelt comes off easily from the M44 engine - there's a spring-loaded, pivot tensioner bolt next to the alternator - and then you need to get the viscous fan off: 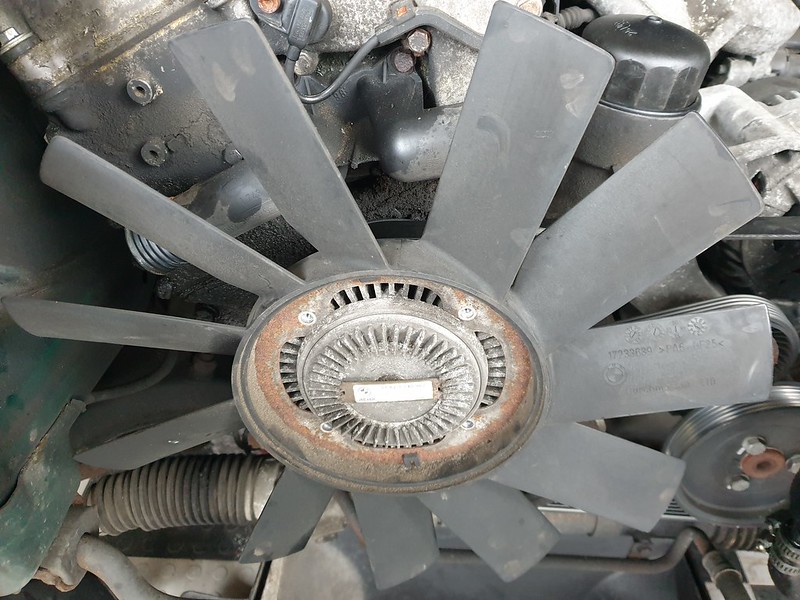 There are four small hex bolts (removed in the photo above) to remove the plastic fan, and the viscous coupling, according to the guides I read, requires a special tool to remove it in conjunction with a 32mm spanner. I read suggestions that you could somehow "shock" the bolt off by putting a wrench on and hitting it with a hammer, but after a couple of attempts, including one that chipped the edge of the plastic water pump pulley (!), I gave in and ordered a tool from Amazon (a bit like this, but for £15) which worked great. Here's the 32mm bolt in situ - remember, it's a left-handed thread! - and the four 10mm bolts that hold the pulley to the water pump: 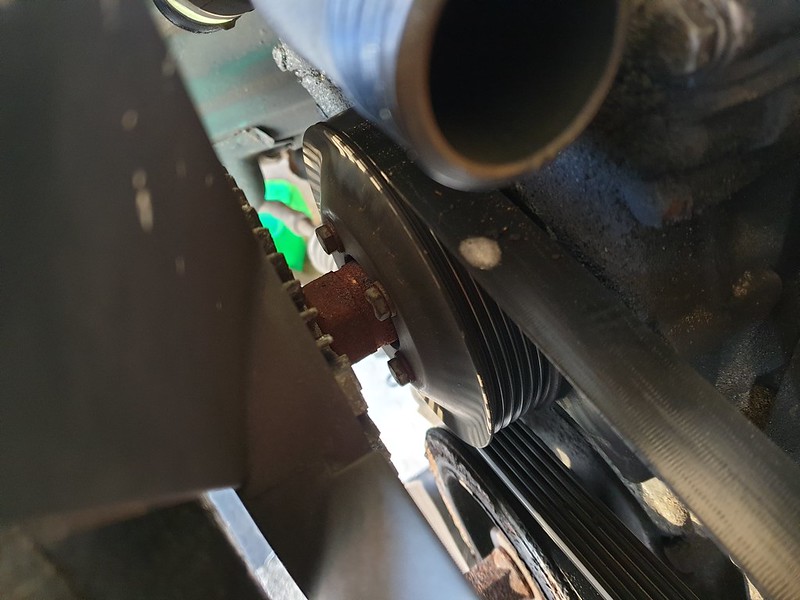 Then you can get at the thermostat and water pump. Some of the guides suggested that the water pump was the trickier of the two, so I got started with the thermostat first, which has four small 10mm M6 bolts to hold it in place. And I promptly ran into a major issue: the top two bolts sheared off almost instantly! One bolt head snapped off, and the other rounded off in seconds. The problem I think was the dirt and grime on the front of the engine (the side closest to the radiator) because over the years, the road grime, water and (maybe!) some stray oil from the filler cap congeal in the recess for the thermostat. This photo was taken before it was stripped, and you can see the grime on the side of the engine. The bolts look strangely okay! 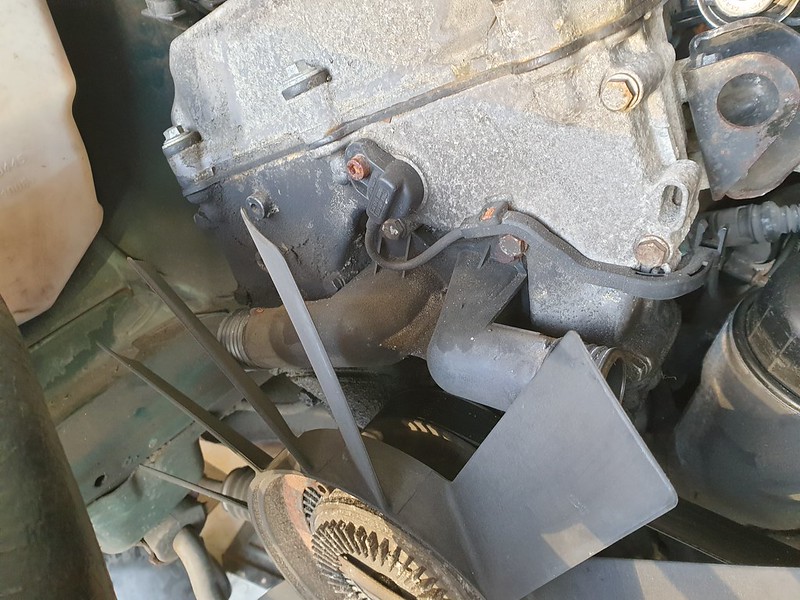 Anyway, I managed to break off the old thermostat and then lost about a week trying to drill the bolts out, trying a bolt extractor kit and getting nowhere: 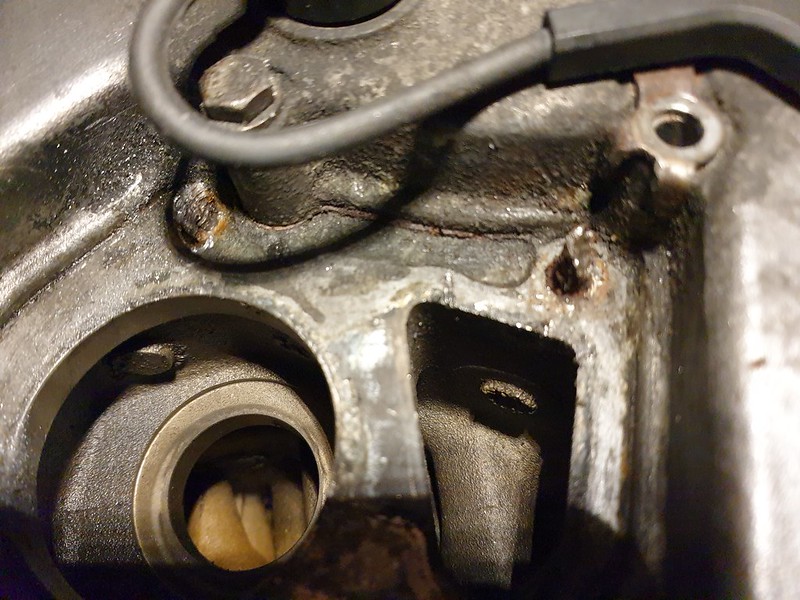 In the end, I threw in the towel and called a local company called ThreadWorx. A very friendly chap called Clinton came out, and welded two bolts to the stuck threads. If he was with me more than 30 minutes I'd be surprised - he worked quickly! 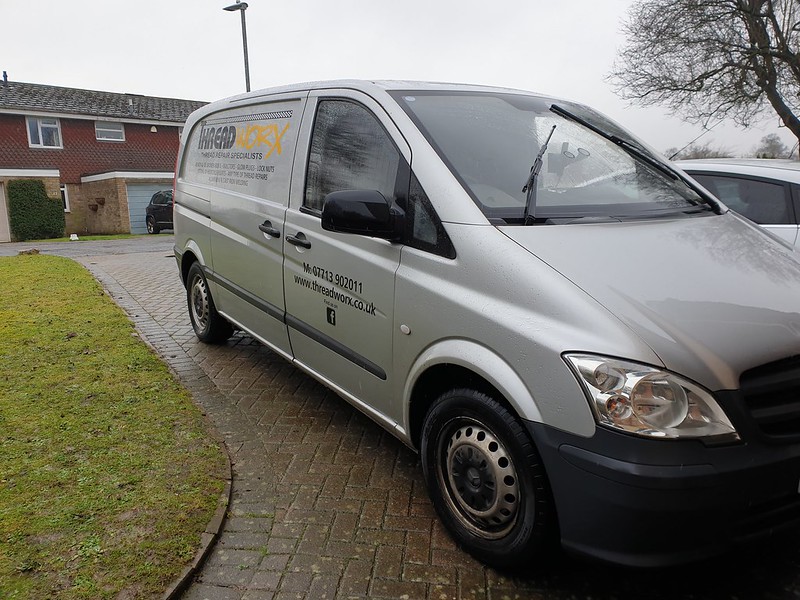 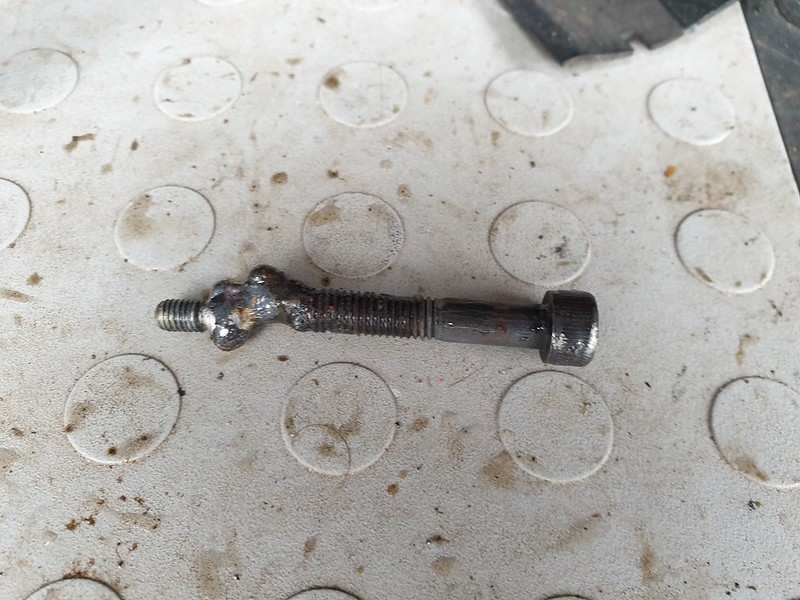 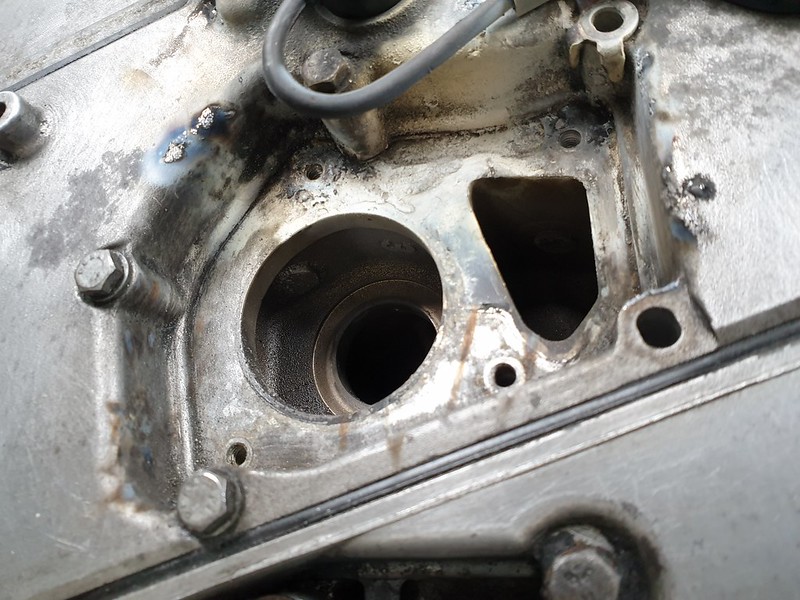 The total charge was £190; I guess a lot of anyone's cash, and twice what I'd paid for the parts, but when you're in a jam, you have to call the experts. In the end, I think this wasn't bad value given I was stuck fast and the car wasn't going anywhere!

I cleaned up the surfaces with wire wool and sourced some new bolts to put the thermostat in. So to the water pump, and to my surprise, it came out a treat! Typical isn't it? It is also secured with four bolts, one of which is a larger hex bolt. But to actually lever it away from the engine, you need to insert two very long bolts into the casting, turning them a 1/4 turn at a time to pry it off: 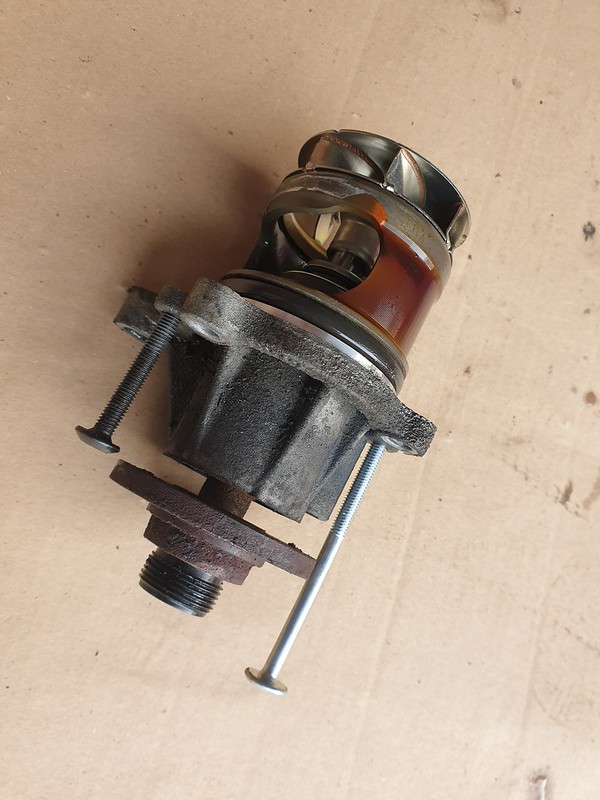 The longer the bolts you can find, the better. They're M6 threads as before, and note that if they're not long enough, you'll foul the water pump casting. Here's the new and old pumps, for comparison. Note the smaller, threaded holes in the pump casting; this helps lever the pump out: 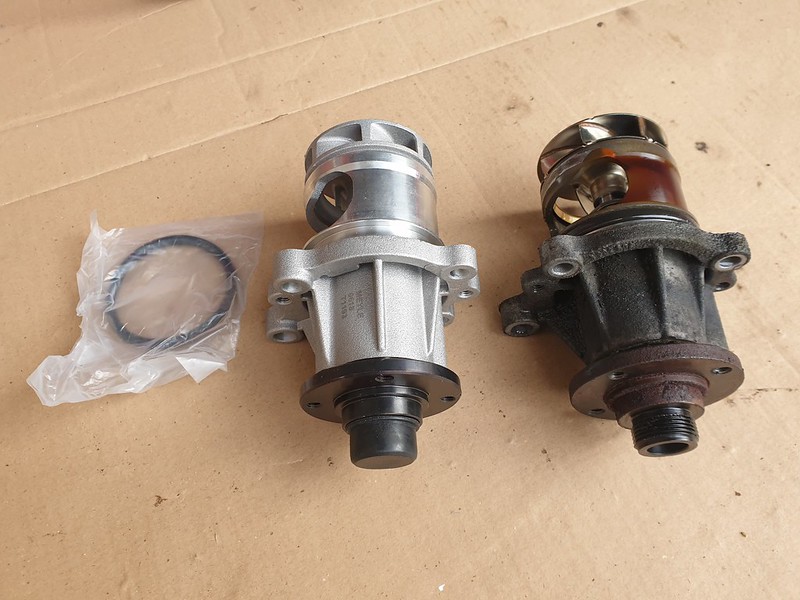 There is a single O-ring seal in the middle of the pump. Interestingly, the original pump had a metal impeller but was a different design; the newer pump's impellers are made of one single cast as opposed to thinner metal sculpted to fit. And, to show that all this work was worthwhile, the old pump had a LOT of play in its bearings. I wouldn't say failure was imminent, but you could just about shake the driveshaft running through it. The new pump went back in nicely; like removal, you just carefully rotate each bolt in turn to bring it on to the block. Here's the view just as I started the clean-up: 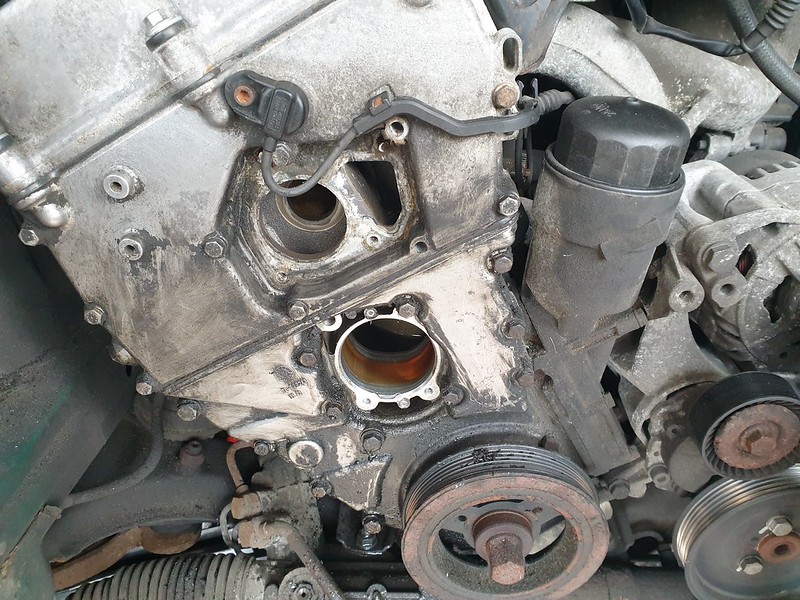 And here are the three new parts all bolted in and (most of) the cleaning done: 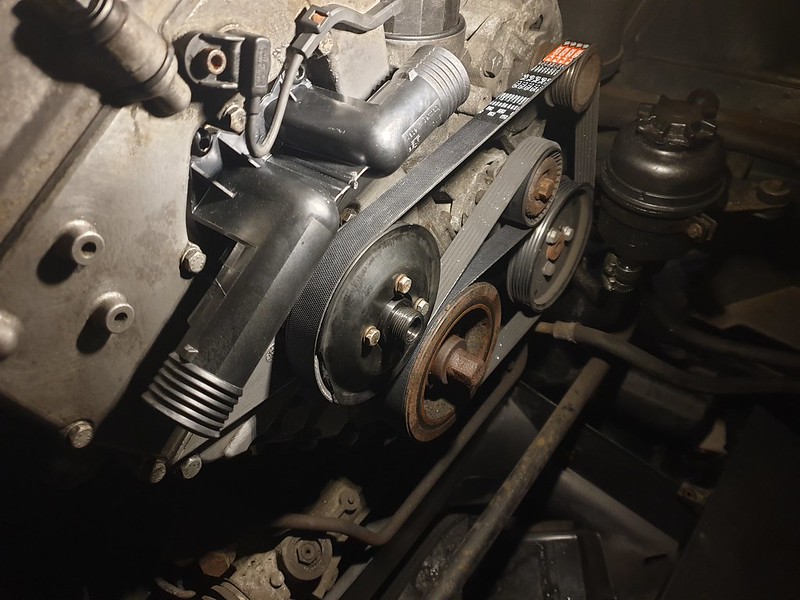 Before reassembly, I took all the plastic parts from the car, including the undertray, to the back of the house to clean and jetwash them. The radiator needs careful handling (don't drop it!) and here, I put a garden hose inside each intake and after inverting the radiator several times, a bit of gunk eventually drained out. It certainly wasn't that bad to begin with I think.

It all went back together in an afternoon. The only other thing I was worried about was the drivebelt. Where it looped round the water pump pulley, the belt looked VERY close to the crankshaft pulley at the bottom of the engine, but after the first start-up, it seemed to tension properly and more space between them opened up.

As well as the oil change, I cleaned the air filter out (only a couple of years old) and fitted new NGK spark plugs. The eBay-bought MAF sensor went back in along with the airbox. I also quickly refurbed the spark plug cover as the silver paint from the BMW logo had flaked away - painted it black, then masked off the letters with a dusting of silver paint - before refitting everything carefully. The special water pump removal tool helps during reassembly as well.

When refilling the coolant, ensure the small plastic bleed screw is undone, set the heater to the hottest setting and keep adding coolant until it bubbles out of the bleed screw. Give the engine a few revs and this dispels any excess coolant, then carefully tighten the bleed screw up (do not overtighten!). I then ran the car up to temperature a couple of times and checked the heater - all good.

I find MoT time always a bit stressful - must be the years I spent as a student running various 1980s Fords! - but the Zed passed with no advisories, its second in a row and third clear pass in four years (the only previous advisory was tyre degradation, which has since been addressed with new boots). The emissions test, where the engine is run at around 2000-3000rpm while stationary, was a bit nerve-wracking when you've just redone all the cooling but the needle sits in the middle of gauge as before.

All being well with the pandemic restrictions, I'll tax it from 1st March. Thanks for reading!

Looks like your power steering cooling loop could do with a rub down and repaint, would have been easy whilst it was stripped down for the cooling job.
Colb
1999 BMW 1.8 Z3
2003 BMW 2.5 Z4
1998 Honda Deauville NT650V
Top

colb wrote: ↑
Thu 25 Feb, 2021 09:24
Looks like your power steering cooling loop could do with a rub down and repaint, would have been easy whilst it was stripped down for the cooling job.

Check! I did this on reassembly, although it was more a wipe down than a repaint. Some corrosion at the top but not too serious. Also cleaned the rubber hoses to and from the rack too.
99/T Z3 1.9 twin-cam, Boston Green, black leather
Top
Post Reply
3 posts • Page 1 of 1