Hey all, I was wondering what parts besides the rear fenders, are needed to have the widebody look on the rear? Do I need trunk lid too? And what about the bumper?
Top

Hi,
You have to cut out the entire rear panel that holds the rear lights in place as the pattern for where your lights bolt on and the bulbs go through are different.
I have a panel new in the box.
Top

Yikes, sounds like a 'down the road' project haha. I'll just stick to changing colors for now. But thank you very much!

As said, to go to facelift involves lots of work, as the boot lid and light clusters are different, and it really isn't worth the effort.

If you do go the pre-facelift widebody route, then the 4 pot rear axle is the same width as the one on the ///M and you can fit deep dish rear alloys.

There are a number of threads on here with more detail where people have attempted this in the past.

Sent from my SM-G960F using Tapatalk

I'm not sure then if the donor car is pre or post facelift. It's a 2000 6 pot model. All i was trying to convert from it is the rear fenders because of their asthetical difference.

Why bother? The pre-facelit wings look better anyway, unless you fit wider wheels and tyres, which may not improve the handling as much as people may tell you. The 1.9 is probably the best-handling of all Z3s, with 50 pounds less engine weight than the sixes, and everything behind the axle line

You may also have problems with your insurer in the event of a claim. It is a lot of effort for nothing except ruining the appearance! The facelift wings will not make your 1.9 look like an M Roadster, and frankly will look rather pathetic. BMW's press release claimed that they were 'Thrusting and muscular,' which sounds like a Golden Hamster on heat . . .

Spend the money instead on having a good cylinder head job, and a couple of Kent 312R camshafts, or a new hood and a new radiator as preventive measures.
A Z3 is not just for Christmas - it's for life!
Top

I am indeed running the m sport staggered wheels/tires atm . I just happen to like the subtle difference between the top portion of the fenders. 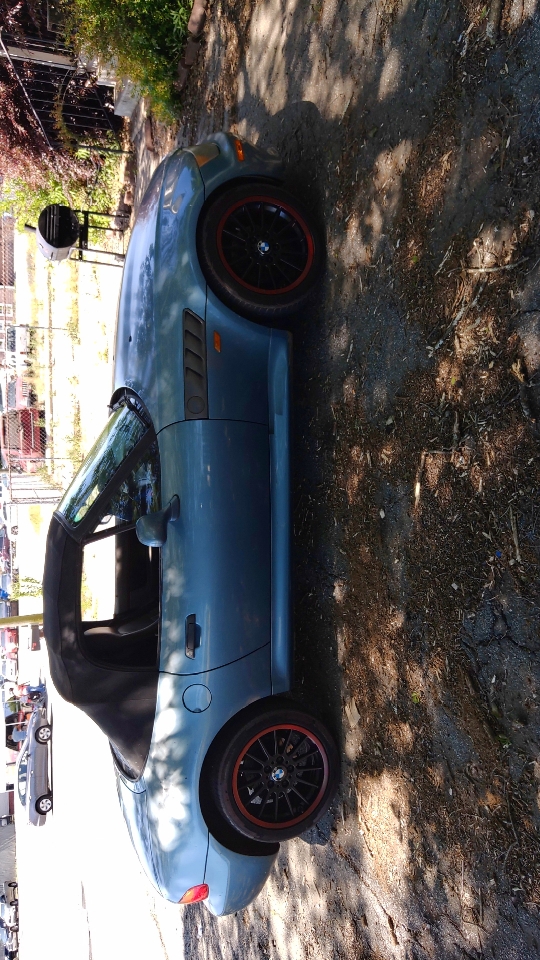